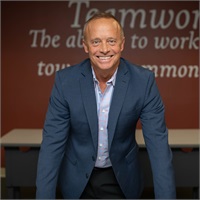 Bill was raised in a small town in Iowa. Both of his parents worked hard and created a great family environment. His father was a decorated veteran and became the town’s postmaster and a successful insurance agent. His mother was a tax preparer for many years. A fond memory was traveling together all over the U.S. by car. He greatly enjoyed high school, from his studies to playing four sports and being a member of the school’s band and chorus.

Raney earned a bachelor’s degree from the University of Northern Iowa, focusing on accounting, business, and education. He gained a firsthand look at financial markets while working in sales and distribution management for Investor’s Business Daily. After earning positions of increasing responsibility at IBD, Bill joined Prudential Securities, which he says had a strong training and mentorship program. He later moved into the banking channel, working for both national and regional banks. He has provided financial guidance for individuals and families for over 27 years. He’s been with GNB since 2006.

Bill and his wife recently celebrated their 31st anniversary and have an adult son. He supports several charitable efforts organized by GNB, as well as other charities, including the local food bank, the American Cancer Society, and blood donor drives. In his spare time, he enjoys spending time with the family; jogging (very slowly); golf; and playing with their puppy, Thor.